‘What causes Climate Change’ is one of the most urgent questions in the second decade of the 21st century.

And it seems the ‘What causes Climate Change’ question has been answered by scientists who declare that man is causing the climate change by emitting greenhouse gases.

Although originally designed to measure atmospheric water vapor and temperature for weather forecasting, scientists working with the Atmospheric Infrared Sounder (AIRS) instrument on the NASA Aqua Spacecraft are now using AIRS to observe atmospheric carbon dioxide. Scientists from NASA, NOAA, ECMWF, UMBC, Princeton and CalTech using several different methods are measuring the concentration of carbon dioxide in the mid-troposphere (about 8 km above the surface). The global map of carbon dioxide above, produced by AIRS Team Leader Dr. Moustafa Chahine at JPL, shows that despite the high degree of mixing that occurs with carbon dioxide, the regional distribution can still be seen by the time the gases reach the mid troposphere. Climate modelers are currently using the AIRS data to understand the global distribution and transport of carbon dioxide and improve their models.Credits: NASA Jet Propulsion Laboratory (NASA-JPL) 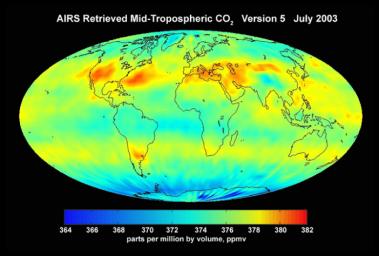 The media is chiming in, scientists with Contrarian positions are called names and risk their reputation.

And to make it worse, those companies – and their fake science and lobbyists – who are the worst enemies of a healthy planet are strong opposers (well, somehow not surprisingly) of the idea of a man-made global warming.

They even dare to claim that the – without doubt – manmade gases like CO2 are actually good and healthy for the planet. Wow, that’s real chuzpe.

Even though I am a Contrarian, I do not want to have to do anything with that rubbish!

So, I do not want to support those who interpret findings in their way just to keep their ecologically bad business models.

But since I believe in ‘truth’, hiding the truth for a greater good is not what I believe in, either. Not to forget that many careers are made on the false “truth”, so that not all false are there for the higher good but for the own bank account, too.

So the big question is: What causes Climate Change? And even more important in my opinion: What kind of Climate Change will happen, what are the consequences and what can man do about it?

I am not the only one sceptic of the idea that the world will keep warming up. No doubt Earth got warmer since about the 1970s… But what will happen in the next 40 years?

And another truth for me is that we cannot go on like we did. We cannot exploit our Earth as we are doing! We cannot destroy the rainforests daily and expect that mother earth will be able to sustain a doubling in population to perhaps 15 billion humans. All inhabitants wanting the Euro-US way of life. Big cars. Computers. Air conditioning. Food. 3-5 meals a day. Fast food. Cheap air travel…

Our fossil resources are vanishing dramatically, burned forever by us to have energy and producing unhealthy waste (gases).

No, though I am a Contrarian, always sceptical when the media wants me to believe something and with opposers being suppressed, we just cannot go on as we do.

So I founded this website. We need to change, no doubt about that. We call ourselves the most advanced civilization to have ever lived on this planet, but we still use fireplace technology like our ancestors? How civilized and technologically advanced is that?

And by fireplace technology our ancestors used I mean our ancestors hundreds of thousands years ago (well, within the last 150.000 years, since science puts the first humans on earth).

We are still burning what they used to burn to heat the caves: wood, later oil and gas.

Granted, Uranium as nuclear fuel is much newer, but still not more sustainable. And we still use steam engine technology to use turn Uranium into heat.

A nuclear plant is nothing more than a very expensive, very dangerous James Watts’ style steam engine. And we are the most advanced being ever on this planet? I find that very laughable.

No, we cannot go on like that. And today, we do have the technologies to evolve as humans using energy into the next phase: Using Renewable, clean, abundant energy of free sources.

I understand that not everybody wants that.

So, that said, what causes climate change?

Well, the official version is that man by burning fossil fuels puts climate changing gases into the atmosphere.

The most important of these gases is CO2, which stops energy from leaving the earth.

So the idea is that the sun heats up the earth as the sun has done for eons.

But normally most of this energy disappears back into space and so we have a mostly live supporting temperature and the climate we grew up with.

But because for about 150 years man blows an unnatural amount of CO2 into the atmosphere to produce energy by burning fossil fuels, the CO2 in the atmosphere mounts up and more and more stops the energy to leave into space, so raising the energy level (temperature) on Earth.

The so called ‘Greenhouse Effect’ is what causes Climate Change, according to this theory.

And because the heat is rising on Earth, more ice and snow is melting, the Oceans change their currents and turn acid, the poles vanish and the glaciers are melting.

This is said to raise the Oceans’ level, drowning many areas just above today’s sea level.

This is the momentarily accepted version. Other scenarios claim plate tectonics, Solar output, Orbital variations, Volcanoes or the Oceans are the reasons.

In the media, the human factor is the only accepted one. But that will change.

And again: I am in favour of (nearly) everything that let’s us change to alternative, renewable energies. But the human factor is overdone in my opinion.

And it is even worse: We will not get a Global Warming, we will have a Global Cooling.

We will need much more energy in the future to heat our homes, not less!

We really, really need the new technologies for a sustainable energy production NOW

Back from What causes Climate Change to Global Cooling

Back from What causes Climate Change to Home of Solar Energy

Top Fuel Efficient Cars – How to find them with Fueleconomy.gov and make them with a Hydrogen Car Kit or the Biodiesel Centrifuge. With fuel getting more expensive every year, having Top fuel efficient cars saves a lot of money. Summary:You can visit fueleconomy if you are in the market for a new car. If…